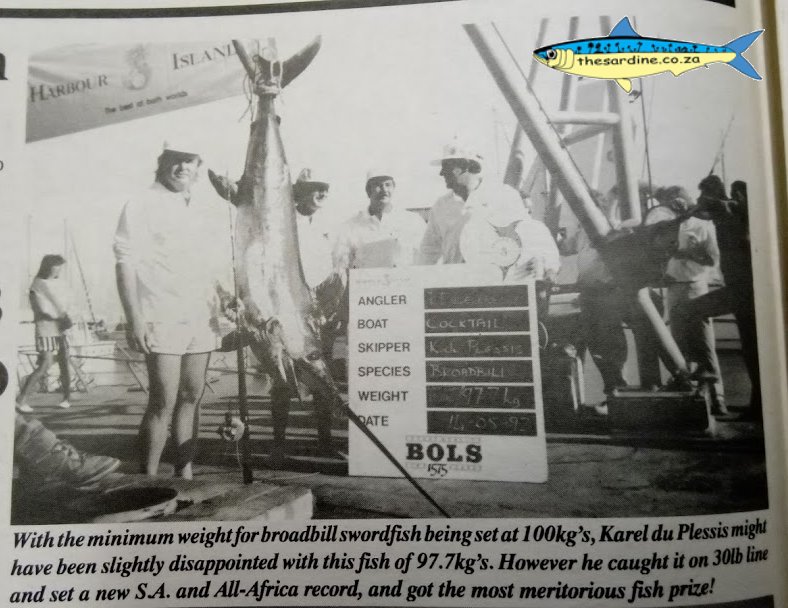 Aiming for a KZN Broadbill

Aiming for a KZN Broadbill: Well finally the government has pulled itself towards itself and we have our rights back. This was a very serious infringement, and I sure hope none of us forget about this when voting again. Some of the people in charge are an absolute joke.

Some are not. And a special thanks to all those who went out of their way to teach certain of these ignorant idiocracies at the top, what running a country is all about. Please stay in politics! We need you there!

And now, we are fishing again!

My Dad has been itching at getting out obviously, but this time, on another special mission. We have tried this before, way back in the days when 8 miles out was considered far out to sea. Nowadays we been going 28 miles and more in the quest for those 100kg plus tuna that we know are out there. But this time – we are after that denizen of the deep. The gladiator of the oceans.

Broadbill on the KZN South Coast: Tony Potgieter caused quite a stir down here in Port Shepstone back in the late eighties, when he caught a cute but feisty little baby 5kg KZN broadbill whilst bottom fishing on the Boboyi salmon reef. Then the Harbour Island Broadbill Classic was staged in Cape Town. This was after Nic de Kok got the ball rolling with his knowledge of broadbill swordfish coming out of the Cape Canyons, on the tuna longliner boats way back then. We caught a bunch. I was in the team that got the first broadbill to the boat. I will never forget seeing that monster tail-walking and somersaulting in the full moonlight, 40 miles out off Cape Point. I was 21. Erwin Bursik got the winning fish that first year – and a piece of land in the superfluous Harbour Island development at the Strand back then.

8 Miles out to sea

Is full of sharks. Just after the completely successful and ground-breaking broadbill competition, we launched the Niteshift out of the Umzimkulu on the KZN South Coast, and headed for our then-proverbial horizon. As stated, even 8 miles was miles for us back then. I was in charge of making the traces and setting the lines. My brother Marc was along. My Dad was driving. And we had the all-powerful Glynn Williams with us too. Who hurt many sharks that night before we realised that at 8 miles, which is just off the continental shelf, there were just too many teeth.

And we kind of lost interest.

Until recently, when some boats have taken the tuna quest further and further out to sea, reaching even 50 miles and more! And winning. A handful of really impressive tuna have come to the scales over the last few years. Including these monsters by Nitro. Two in two days this guy went!

Click on this link for the full story on The Sardine News.

It opens in a new window. Very impressive achievement, I can still actually hardly believe it happened. I fished here since I was a kid and this was a ground-breaking moment for all of us around here. As a direct result, the horizon has moved further and further out!

Well, the theory is, that sharks won’t be so resident out here, where the broadbill are. These big game fish seem to all have their very own fun zones, and out at 16 miles, where it’s 800m to 1200m deep, it’s broadbill water. It also is yellowfin, big-eye and southern-bluefin water, and so this mission is double-function in that we may hook a big tuna too.

And so we can take two passengers, perhaps three, out with us on these missions. It’s an all-night affair and we can only really go when the moon is black or full. This is when the tides allow us in and out through the river mouth of the Umzimkulu River. It’s very comfortable at these times, and we only go when the sea is flat and we have perfect weather.

The plan would be to come and spend a few days with us down at the Umzimkulu Marina. at around these ideal times. They are on right now, with that huge moon lighting the way for us. And some real full high tides. The next is in two weeks again, on the black moon. Our favourite moon. And then again two weeks after and so on.

My Dad’s boat Niteshift, is a very practical and well built 20 ft Supercat with twin 4-stroke Yamahas. She features a walkaround cabin with two berths and plenty of fishing space. She is berthed at the right in the following image. And right behind her is the way out to sea – under the Umzimkulu River bridge.

Maybe we will come home with a handsome KZN Broadbill!

If you would like to be a part of this unique and challenging mission, please get in touch and we can chat it all through. I am on umzimkulu@gmail.com or +27793269671 WhatsApp anytime.

The Umzimkulu Marina has a Facebook page here, where you can follow us along. We run an action-packed and ever-growing YouTube Channel which you can watch right here.