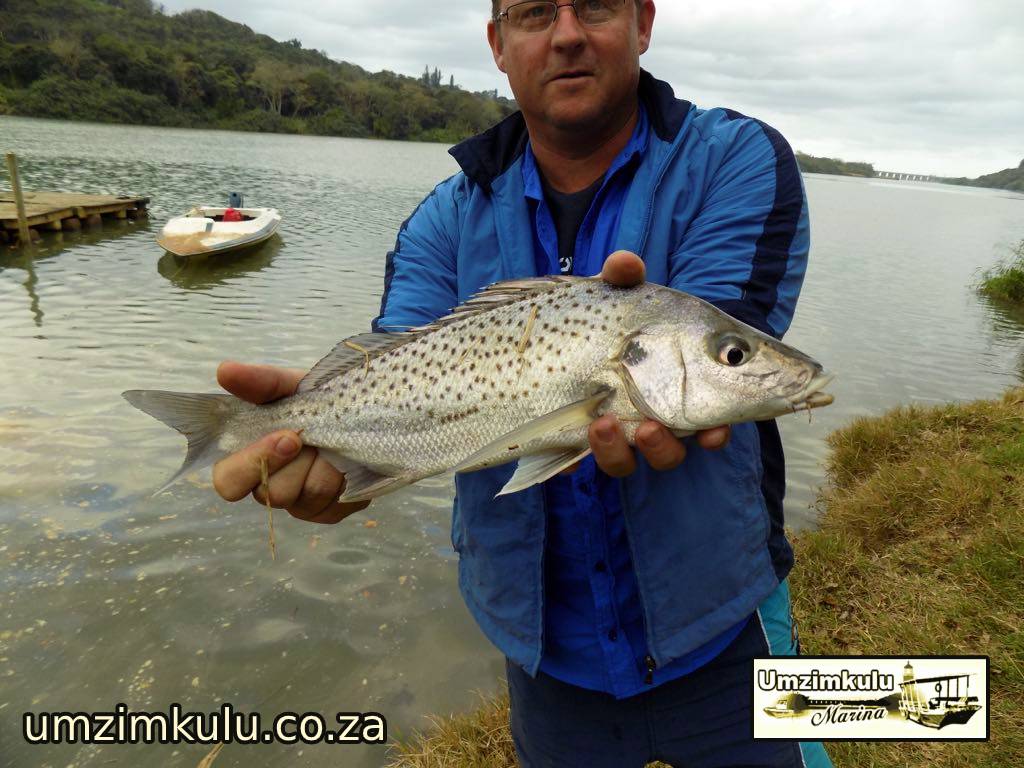 The Umzimkulu Grunter up at the jetty area at the Umzimkulu Marina, don’t seem to get that big really. Our biggest fish around the jetty were all in one night. Caught on cracker shrimp. All the grunter that one evening were monsters – over 4kg’s (monsters to me). And we all caught so many (all released), that we actually stopped fishing before too long!

But as said, around the jetty, we normally catch small grunter. Like about 1kg or less. These fish are almost big enough to eat, but we tag a few and release them. After giving them a quick lecture about biting suspicious-looking baits. We use circle hooks and that really helps us not hurt the fish at all. They are tough and swim away with spirit every time.

We use sardine fillets to target these energetic little guys. A running sinker. Some decent leader – the softer the better. And that groovy little circle hook. If you have fresh enough bait, and you bunch your bait up in the ‘circle’ of the ‘circle’ hook, you don’t even need to use cotton. Just cast gently.

However, if you are quick and/or lucky – you will get yourself a live prawn to bait with. The bigger the better. They are easily caught along with the baby mullet, with a good throw of a well-timed cast net. It’s best to bait the water before you throwm for about 15 mniutes, giving time for the message of free chow gets out there a bit. We have been lucky enough to catch tiger prawns up to 8 inches long like this! What a bait – they don’t even last a minute and a big grunter will be onto it.

We get other cool-looking prawns with long claws too. These guys cannot go in with the mullet (live well) as they grab ahold of them by the throat latch as they swim past and that’s that! The femail versions don’t have claws and are plump, often filled with roe too – these are the ones. As thick as your finger and full of zest.

To hook up, just thread the point of then circle hook throuigh once, right at the end of the tail, in the tough carapace skin. Flick that guy out there on the drift and see what happens!

Other baits are fresh squid and prawns frozen from the shop. Those worm thingies if you can find them. Crackers – also a story but well worth the extra effort of getting a few. Sea-lice are great too…I have a feeling sea-lice would be the trick for those big ones down in the cold at the mouth at night time.

Grunter on the circle hook

The circle hook fishing style is actually really exciting. Borrowed from my marlin fishing experience – I get the same buzz when anything comes along and tries to swallow my bait-laden circle hook. It’s such a rush. Because you see – with circle hooks – you don’t strike! None of that jab-jab-jab hit and miss stuff. Nope – the system works like this…since the hook is completely round, at has no sharp point stick outwards. So the fish swallows the entire lot, easily. Even the tiniest strepie or silver bream can get these hooks into their mouth and gut. Now he has your bait, swallowed – just like a marlin will have gulped down his tuna. And he will triumphantly be swimming off – oblivious to the trap sprung upon him.

As he swims away, all you do is gently and smoothly, engage, and up the pressure on the drag. Until you are up to strike, when you can lean in and feel how that hook slides up the fishes insides, without snagging a thing like a J-Hook would – and then flips over in the corner of the fishes mouth, where it engages every time. Well. Every time you get this right that is.

Now you have a grunter (or a marlin), hook perfectly in the corner of the mouth. Where the both of you can argue the fight out fair and square. And then when it’s time to release your fish, the circle hooks come out so very easily.

Tip: if the fish you are encountering, are bigger fish – then you have to immediately change your circle to suit the size of your target fish’s lips. Big fish = big lips. The bite of the hook you are using needs to effortlessly fit over the lip. Or you will not hook up. Heartbreaking when that first run is a blistering one and the hook just flips out and over because it’s too small. Rather have a bigger circle than a smaller one.

Otherwise this happens…from a recent trip out off Bazaruto…got to use the right sized hook!

Ok, now for the big grunter…

Down at the mouth area, of the Umzimkulu – I have seen the monsters with my own eyes. Free-swimming and caught on the beach. Grunter so big I thought they were daga salmon! A metre long and more. Shoaling. Feeding. WIth some trophy fish being landed. There are some very hot grunter hunters down in the mouth area. But man it’s hard work in tough conditions. Night-time only, and that offshore wind comes howling down the river.

But that is what it takes, to get your really big grunter. Sheer effort and will. At that size, they are a lot fussier and harder to fool too. Getting a decent prawn live bait is going to stand you a really good chance. Or some sea-lice maybe.

If a trophy grunter is your gig, come and join us at the Umzimkulu Marina.